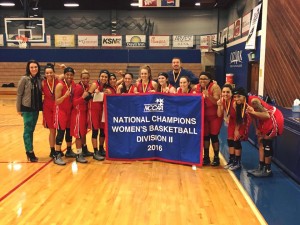 The Arlington Baptist Lady Patriot Basketball Team has claimed back to back ACCA and NCCAA National Championships.  Since it’s start four years ago, the program has dominated the NCCAA Division II with four region championships, two national championships, and a national runner-up.  In this years championship game, the Lady Patriots beat the Hillsdale Lady Saints for the third time in three weeks 102-99.  It was the Saints who the Patriots beat in the SW Region Championship game and the ACCA National Championship game.  Freshman Zayda Gonzalez had 26 points and 15 rebounds and was named tournament MVP.  Senior Jade Johnson had 35 points, and senior Tori Wise had 19 points to close out the victory.  Johnson and senior Elaine Herrera both received all-tournament awards for the Patriots who defeated Grace Bible College and North Central University on the road to the championship.