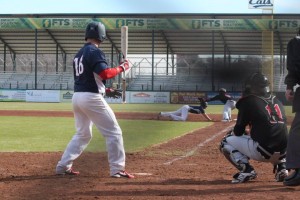 It was a tight game until University of Central Oklahoma scored eight late runs for the 14-5 victory over Patriots on Tuesday at LaGrave Field.

The game was never in doubt after the first, as University of Central Oklahoma scored two runs on a two-run single and continued to add runs in every inning but the fifth and sixth.

After pushing across one run in the bottom of the third, the Patriots faced just a 5-1 deficit. An RBI single by Kieth Schulz (Keller, TX) fueled the Patriots’ comeback, in addition to Vargas’ efforts. Arlington Baptist watched a 6-3 ballgame get stretched out of their reach in the seventh when UCO knocked home three players off a two out base clearing double.

The Arlington Baptist Men’s Baseball team will travel to Stephenville, TX this weekend to take on Tarleton State University for a 3-game weekend series. The game times for the weekend are: