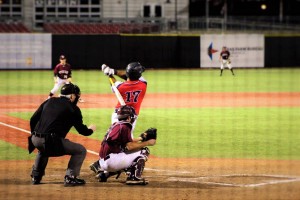 Malcolm Cepeda (Junior Corpus Christi, Texas) did all he could to give the Patriots a boost, but it wasn’t enough to get past Austin College. Cepeda hit a two-run home run in the top of the fourth to score the first two Patriot runs. A RBI double by Tyler Brown (Sophomore Bastrop, Texas) and a RBI single by George Valdez (Freshman Forney, Texas) came in the top of the fifth inning to close the Patriots deficit 6-4. Austin College survived the Patriot’s surge and put up one run of their own in the sixth.

Josh Darden (Sophomore Athens, Texas) did his best to change the outcome in game two, but Darden couldn’t carry the Patriots past Austin College as the Patriots lost 4-0 in seven innings on Friday. Darden handled Austin College’s lineup with ease, racking up nine strikeouts over 5 1/3 innings. Darden would finish his outing, allowing two earned runs, six hits and one walk.