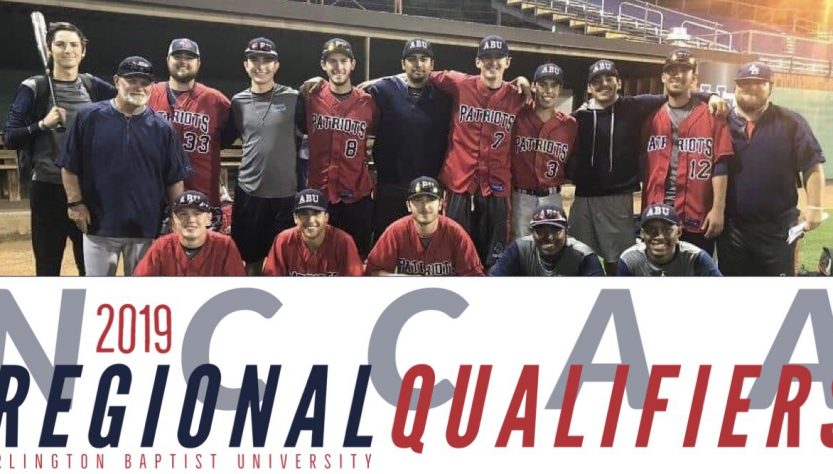 Arlington, TX- Our men’s baseball team qualified for the NCCAA Southwest Regional Tournament after an 8-5 win against Hardin-Simmons University.  The tournament is hosted by Southwestern Christian University. The tournament will be held May 13th- May 16th in Bethany, Oklahoma.

The game was tied at two with Patriots batting in the top of the seventh when Parker Humphrey drew a walk, scoring one run.

Patriots evened things up at two in the top of the sixth inning. Stephen Webb hit a solo homer.

Ryan Rivera was credited with the victory for Patriots. He surrendered five runs on nine hits over seven and a third innings. Ricky Boren threw one and two-thirds innings in relief out of the bullpen. Boren recorded the last five outs to earn the save for Patriots.

#26 took the loss for Hardin-Simmons University. He lasted two innings, allowing two hits and zero runs while striking out two and walking one.

Patriots launched one home run on the day. Webb went deep in the sixth inning.

Patriots tallied 13 hits on the day. Webb, Payton Walk, Boren, and Kaine Yeakle all managed multiple hits for Patriots. Walk and Webb each managed three hits to lead the Patriots.