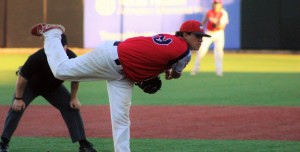 The Patriots grabbed a 2-0 lead in the top of the third with a two-out, two-run triple by Kailen Glover. The Jaguars answered in the bottom half of the third to take a 4-2 lead. Andrew Gross led the rally with a two-run home run.

Tyler Brown led the inning off with a walk. James Duvall followed with an infield single. A sacrifice bunt from Lorenzo Lynch II advanced the runners to second and third. The Jaguars walked two batters making it a 5-4 ballgame. Ryan Sloma came to the plate with bases loaded. He hit an RBI single to right field tying the game at five. Jared McKinney got the game winning RBI when a pitch hit him with the bases loaded.

Senior Drake Boswell entered the game in the ninth with a runner on first. He recorded the last three outs to earn the save for the Patriots in their season opener.

The two teams return to Riverside Stadium on Saturday for a noon doubleheader.