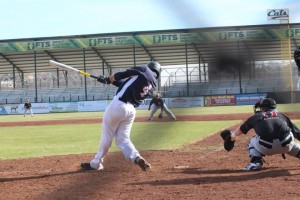 Arlington Baptist took the last of eight lead changes in a back-and-forth affair against University of Science & Arts Oklahoma, securing an 8-7 victory on Monday at LaGrave Field in Fort Worth.

The Patriots took the lead in the bottom of the eighth inning and held on for the victory. Arlington went up for good on a two-run single by Ryan Wagley, plating Kieth Schulz (Jr./Keller, TX) and Josh Eatherly (Jr./Forney, TX).

Eatherly racked up two RBIs on three hits for the Patriots singling in the third, fifth, and sixth innings.

The top of the first saw USAO (22-20) take an early lead, 2-0. The Patriots then held them scoreless for four innings while they tacked on four runs in the fourth. Arlington then scored one run in the fifth inning, and then followed it up with one more in the sixth.

University of Science & Arts Oklahoma scored one run in the top of the ninth to cut its deficit to one, but it wasn’t enough as Armando Garza (Jr./McAllen, TX) was able to shut the door for his second save of the season.

Arlington Baptist will play their final game of the regular season on Wednesday afternoon at 2pm against University of Texas Arlington (18-23) on the campus of UTA.