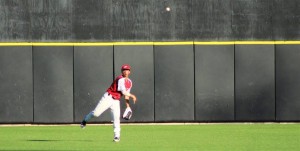 Justin Olivarez (Freshman San Antonio, TX) powered the Patriots at the plate and on the bump Tuesday, willing the Patriots to a 9-8 victory over Mid-America Christian University.

Olivarez racked up two RBIs on three hits for the Patriots. He doubled in the third inning and singled in the second and sixth innings.

The teams traded runs for most of the contest, resulting to nine lead changes in the game.

Ivan Rios (Sophomore Fort Worth, TX) scored on a pass ball in the eighth inning giving the Patriots the walk-off win.

The Patriots and Mid-America Christian University lit up the scoreboard on Tuesday as they combined for 21 runs. In the end, The Patriots won the offensive battle 11-10 in seven innings.

There were 18 hits, including six extra base hits in the game.

The teams traded runs for most of the contest, resulting in six lead changes during the game.

Currington racked up five RBIs on four hits for the Patriots. He doubled in the third inning, tripled in the fourth inning, and singled in the first and seventh innings.

Jonathon Davis (Freshman Cedar Hill, TX) got the win for the Patriots. He allowed one run over four innings. He struck out two, walked three and surrendered four hits.