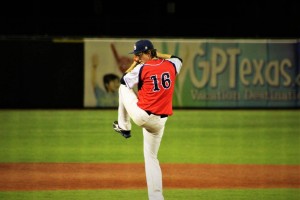 The offense was lead by Tyler Brown (Jr./Bastrop, TX) and Ryan Sloma (So./Flower Mound, TX) who each collected multiple RBIs in the contest. Lyric Walker (Fr./Haslet, TX) had a productive day at the plate. He went two for two with a triple and two runs scored. The Patriots won 6-1.

Parker Kleinert’s (Jr./ Henrietta, TX) strong performance on the mound was not enough for the Patriots in game three. He tossed seven innings, giving up one earned run, three hits, and striking out six. An error in the sixth inning turned costly for the Patriots as Central Christian scored the winning run.

The Patriots offense was limited to three hits in the contest. Tyler Brown (Jr./Bastrop, TX), Ryan Sloma (So./Flower Mound, TX), and Ivan Rios (Jr./Fort Worth, TX) each collected a hit. The Patriots lost 2-1.