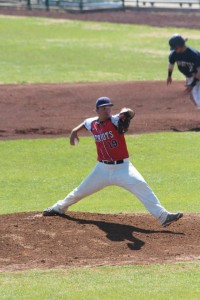 The Arlington Baptist Patriots (17-21) played host to SWAC powerhouse Texas Southern University (10-17) on Wednesday afternoon at LaGrave Field in Fort Worth, TX.  Behind the solid outing of Armando Garza (Jr./McAllen, TX), the Patriots were able to shut out TSU for seven innings of play and hold firm to a comfortable four run lead.

Garza tossed seven complete innings allowing only one earned run, which came in the eighth after surrendering a hit to the first batter he faced in the frame. Austin Valdez (Fr./Mansfield, TX) came to relief aid in the eighth with two runners on and no outs. Valdez was able to keep damage to a minimum and finish out the game with a complete ninth inning backed by action packed defense from Keith Schulz (Jr./Keller, TX) and Josh Eatherly (Jr./Forney, TX).

The Patriots offense was fueled by Hestand Foster (Sr./Waxahachie, TX) who collected two hits and 2 RBI’s. Ryan Wagley (Jr./Mansfield, TX) sparked the Arlington fourth inning with a leadoff single, followed by a sacrifice bunt by Florentino Moreno (Jr./Little Elm, TX). Clint Hall (Sr./The Colony, TX) was able to reach on an error with two outs, and Hall and Moreno were both driven in by Foster with a two-run, two-out single to take the 4-0 lead at the midway point of the game.

The Patriots will resume play this weekend against regional opponent Hillsdale Baptist in Moore, OK.

The weekend schedule will be as followed: