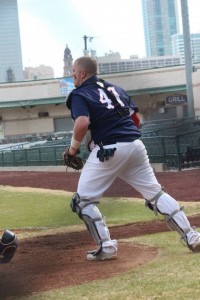 Moreno singled in the fourth, fifth, and sixth innings to lead the offense on the day.

Patriots went up for good in the fourth, scoring six runs on an RBI double by Justin Watson, followed by three consecutive singles.

Arlington Baptist added two more runs in the top of the fifth. A clutch error scored Ryan Wagley to open the scoring in the frame. That was followed up by Nathan Goetz’s single, bringing home Moreno.

In game three, the Patriots refused to relinquish the lead after grabbing it early against TAMIU, recording a 7-1 victory on Sunday.

The game was decided quickly as Patriots exerted its will early with six runs in the first three innings.

Nathan went a perfect 4-4 at the dish for Patriots.

Justin Watson was a workhorse on the mound while bagging the win for Patriots. Watson allowed no earned runs, four hits and three walks while striking out two over 6 1/3 innings of work.