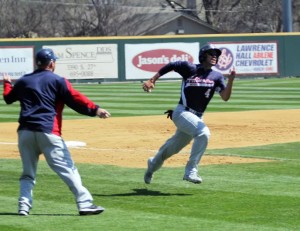 Arlington Baptist Men’s Baseball team scored seven runs in the seventh to cap a 14-4 win over University of Dallas on Wednesday evening at LaGrave Field in Fort Worth, TX.

Arlington pulled out the win thanks to a strong third inning. The Patriots scored on a three-run double by Justin Watson, plating Ross McCarty, Ryan Wagley and Tino Moreno.

Wagley did his best to jumpstart the offense for Arlington Baptist, reaching base three times. He scored one run and had one RBI. He singled in the fourth inning and tripled in the seventh inning.

Caleb Sims got the win for the Patriots. He allowed three runs over 5 2/3 innings. He struck out four, walked four and surrendered six hits.

The bottom of the first saw the Patriots take an early lead, 1-0. The Patriots then brought home one run in the fourth inning, and matched that run total in the eighth. In the fourth, Arlington scored on an RBI single by Trevor Moon, bringing home Hestand Foster.

After a quick strike from University of Dallas, Arlington Baptist responded with one run in the eighth off an RBI double by Clint Hall.

The Patriots will resume play next week with a single road game to the University of Central Oklahoma on Tuesday and will host Division I opponent Texas Southern University on Wednesday April, 2nd at 2pm at LaGrave Field.