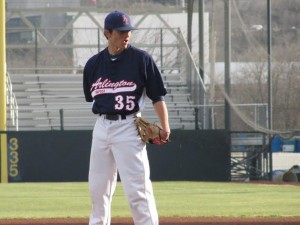 The Arlington Baptist College Patriots traveled to Edinburg, Texas for a tight weekend series against UT-Pan Am. The Patriots fell 7-4 in game one behind a solid start on the hill by senior Michael Scruggs.  Freshman Austin Valdez was perfect in relief giving the Patriots a chance, but the UTPA offense was able to score just enough runs to keep a comfortable lead for the win.

In game two, McAllen native Armando Garza (Jr./Odessa JC) took the mound and carried a start 7 complete innings while only giving up three runs. UT-Pan Am was able to scratch in two more runs in the bottom of the eighth inning to take the game 5-2.

Due to weather, Arlington and Pan American started game three of the weekend series on Saturday immediately after game two. Senior starter Caleb Sims threw a solid 6 full innings and handed the ball over to the bullpen to watch freshmen Jeremiah Skiba and Austin Valdez come in and shut down the UTPA offense.  The Patriots showed a spark in the 7th inning bringing in two runs, but it wasn’t enough to overcome UTPA’s early runs leaving them short 4-2 as the final.