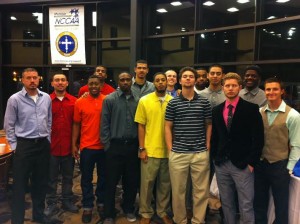 The Arlington Baptist Patriots stunned their competition as though down two of their starters, they managed to repeat and make it to the NCCAA National Championship game for the second year in a row.

Faced against the same team they battled and lost to the year before, Ohio Christian University, the Patriots came up short again, taking the second place finish 91-69.

Senior Jeremiah Ford and Junior Joshua Green were elected for their excellent play to the ‘All Tournament Team.’ Ford tallied 20 points, 6 boards, and 3 assists in the championship game while Green added 16.

The Patriots played five guys for 30-plus minutes while the Ohio Christian Trailblazers did not have one player reach the thirty minute mark, as they had seven guys each put up 20 minutes while digging in to their bench to keep their starters primed.

Junior Guard Russel Wesley led for the Trailblazers with 27 points and 9 rebounds on 29 minutes of play.

The Patriots finished with their best season in the past two decades with a 22-11 record as they faced off against numerous Division II and Division I schools, with one National Championship in the ACCA and one 2nd place finish in the NCCAA.

The NCCAA Bracket can be seen at: