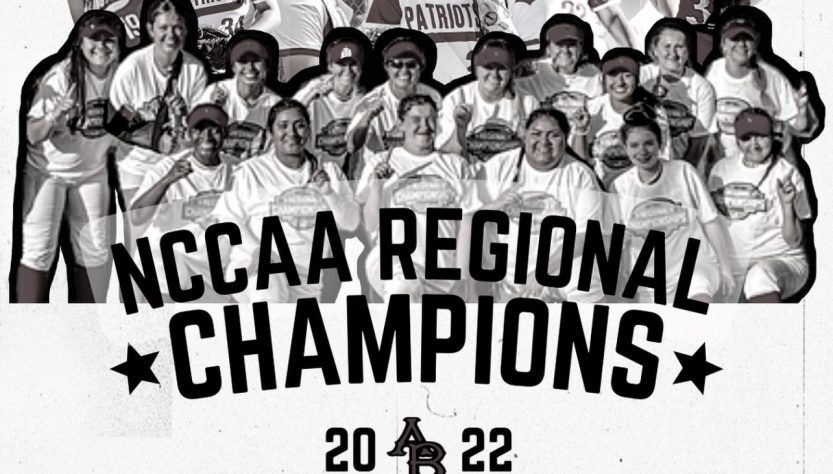 PLANO – The Arlington Baptist softball team captured the NCCAA Independents Regional Championship on Saturday in thrilling fashion, staving off elimination in three consecutive games to win the regional tournament.  The Patriots, in the first year of existence for the softball program, will now advance to the NCCAA College World Series in Kansas City on May 17-19.

#1 seed Arlington Baptist used a seven-run 6th inning to defeat #4 seed Southeastern Baptist (MS) in run rule fashion, 9-1 on Friday afternoon.  The Patriots were paced by an outstanding outing from freshman Kyndal Murphy in the circle, who tossed five innings, allowing just one run on four hits and striking out five.  Senior McHailee Danner pitched a clean 6th inning to earn the save.

Trailing 1-0 in the fourth, the Patriots offense would take the lead for good behind a solo home run by Danner and an RBI double from junior Briana Perez.  The big blows in the seven-run 6th came from junior Amanda Perez on a triple and a home run by freshman Brianna Escalante.  Escalante, Perez, and junior Greer West all had multiple hits for the Patriots in the game.

In the nightcap, second-seeded Dallas Christian jumped on the Patriots early and swung some hot bats to defeat the top-seeded Patriots 10-4.  The Crusaders plated 4 runs in the first inning behind three doubles.

Trinity Johnson got the win in the circle for Dallas Christian, limiting ABU to four runs on nine hits.  Kadi Hanks threw 2.2 scoreless innings in relief for the Crusaders.  Sophomore Kyleigh Sullivan took the loss for Arlington Baptist, allowing four runs on five hits in the first inning.

Offensively, the Patriots were led by Danner, who went 3 for 4 at the plate.  Danner and sophomore Desiree Nziramasanga each collected multiple hits for the Patriots.

The loss vaulted Dallas Christian into the championship series, while it sent the Patriots to battle their way out of the loser’s side of the bracket.

#1 seed Arlington Baptist was faced with the daunting task of needing to win three games on Saturday to advance to the College World Series.  The first step was an elimination game against Ecclesia College (AR) on Saturday.  The Patriots survived and advanced, defeating the Royals 8-0 in run-rule fashion.

Danner was magnificent in the circle, tossing a complete game, two hit shutout, striking out eight in the process.

Offensively, Danner and West racked up RBIs in the fifth inning.  West, Amanda Perez, and Briana Perez all had multiple hits for the Patriots.

The victory sent the Patriots to the championship series, needing to defeat Dallas Christian twice to win the tournament.

Arlington Baptist responded in a big way behind a nine-run 6th inning to defeat Dallas Christian 16-5 to force a decisive winner-take-all game 7 of the tournament.

After exchanging leads early in game, Dallas Christian took a 5-3 lead in the 4th inning.  With the score the same heading into the top of the 6th, senior Natalie Winchester hit a bases-clearing double that scored three, giving Arlington Baptist the lead for good.  The Patriots continued to pour it on, with sophomore Zoey Bredleau, junior Kara Cannon, junior Ariana Ramos, and Briana Perez all adding RBIs in the big 9-run outburst.  Bredleau added a home run in the 7th inning.

Senior Destinee Urea made a surprise start in the circle, going an inning-plus while giving up three runs on three hits.  Ramos got the win in relief, allowing two runs and scattering nine hits over 4.1 innings.

The decisive winner-take-all game proved to be nothing less than thrilling.  The #1 seed Arlington Baptist would not be denied, outlasting Dallas Christian 8-6 to claim the program’s first ever regional championship and clinch an automatic bid to the NCCAA College World Series.

Arlington Baptist opened up the scoring in the second inning when Amanda Perez doubled on the first pitch of the at bat, scoring one run.  After Dallas Christian regained the lead at 4-3 in the top of the 4th, ABU evened things up at four in the bottom of the fourth inning.  Perez singled on the first pitch of her at bat, scoring one run. The game was tied 4-4 heading to the bottom of the 5th when Ramos blasted a towering 3-run home run off Dallas Christian ace Summer Hasfurter.  Junior Kierra Mendoza added an inside-the-park home run in that same inning on a ball down the right field line that caromed away from the defender.

Danner got the win for ABU. The ace went the whole way, allowing five hits and four runs while striking out nine and walking one in 7 innings.  Hasfurter took the loss for Dallas Christian, giving up ten hits and eight runs over five and a third innings.

The Patriots collected 12 hits in the game, with Escalante, Amanda Perez, and West all collecting multiple hits.

Head Coach Davis Beaver: “The team came ready to play.  They live for moments like these.  We practice for moments like these.  So, they came ready.  Our pitching staff was good.  I was really pleased with McHailee Danner, Kyndal Murphy, and Ariana Ramos.  Our bats were great.  Briana Perez and Amanda Perez were hot all weekend.  Zoey Bredleau made a statement this weekend.  Brianna Escalante is the best player in the region, and she showed it this weekend at the plate.  But it was a great team effort all the way around, and that’s leading us to a good place moving forward.  It is great for a coach to know that anybody I bring in off the bench or out of the bullpen is ready to come through for us.  Destinee Urea, coming off injury, gave us an important inning starting as the opener in the second to last game there, and then the ball manages to find her and she gets two of the three put outs in right field in the clincher.  I’m so happy for her.  I’m happy for these seniors…Destinee, Natalie Winchester who had a huge 3-run double, and of course McHailee Danner in the circle.  A coach always wants their seniors to have the best year of their college career and to finish it big.  For them to take the leap of faith they did by coming to ABU, to a first-year program, and for us to be Regional Champions and they get to finish on the national stage at the World Series, I’m so happy for them.  I told them when we lost [to Dallas Christian on Friday] that their careers are not over, that we will make sure they end on top.  Not sure they believed me, but here we are.  But I’m just so proud of this team.  I always tell them, if what you did yesterday looks good to you, then you haven’t done much today.  They have developed the championship mindset, and it was a season-long process for them to get that.  They are tenacious and they play that way.  We talk about Patriot Magic.  That tenaciousness leads to that.  Look at when we did all our damage, in the 5th, 6th, 7th innings.  That’s the sign of a good team.  This team, they understand that they’re good, and they don’t need to boast.  They just need to focus, and they usually do a good job of that.  They create good momentum.  Anytime a player comes to the plate, you feel like something good is going to happen.  I don’t see a lot of holes in our lineup.  Again, we are a first-year program, this is the first team in school history.  They’re writing the record books and setting the standard of excellence for all the future Patriot teams.  But this team is not done yet, we get to go to the World Series, and we will finish as one of the top 8 teams in the country.  This team doesn’t need to be nervous; they just need to be excited and be who they are.  Be who they’ve been for 30+ games this year.  I give all glory to God for blessing us, I’m grateful to Him and to the players for their hard work and effort.  We will go see what else we can accomplish…we’re going to bring Patriot Magic to the World Series.  Kansas City, here we come!”