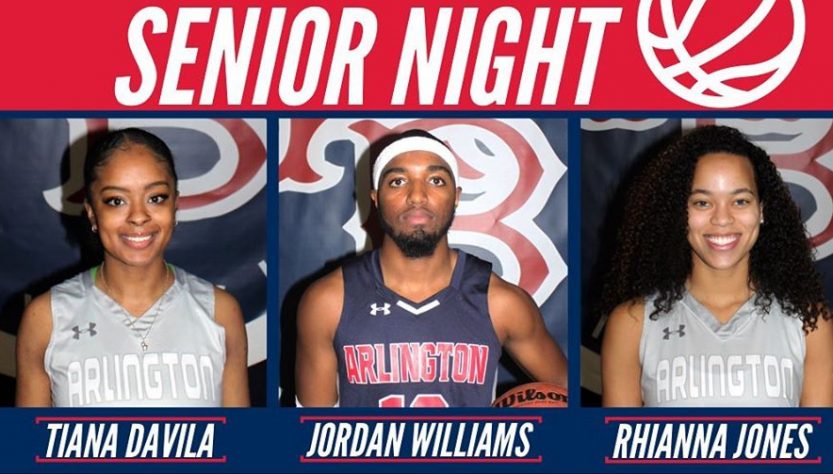 Our Patriot and Lady Patriot basketball teams honored their three seniors last night in their last home game of their careers at Arlington Baptist University. 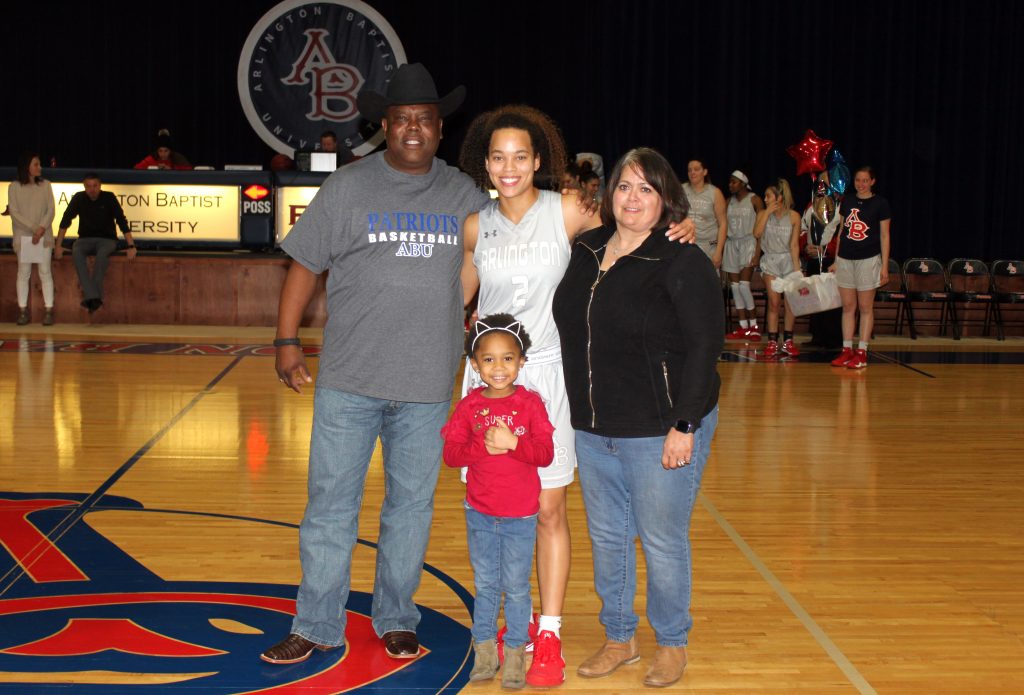 Rhianna Jones is a Senior forward from Odessa, Texas. She will graduate in May with a Bachelor’s degree in Interdisciplinary Studies. Rhianna joined our Lady Patriot basketball program in 2018, coming from McMurry University. Over her 2 and ½ year career at Arlington Baptist, Rhianna has played in 64 games, amassing 352 points, 396 rebounds, 110 steals, and 43 blocks. She enjoyed her best game last season in the ACCA National Championship game against Rhema Bible College where she scored 16 points and grabbed 7 rebounds, leading her team to a 99-48 win. She has won two NCCAA National titles and two ACCA National titles with the Lady Patriots in 2018 and 2019, and received NCCAA All-Southwest Region Honorable mention honors last season, as well as being named MVP of the 2019 ACCA National Tournament. Rhianna is a wonderful person, a great teammate, and an outstanding rebounder. Her hard work and leadership will be missed. 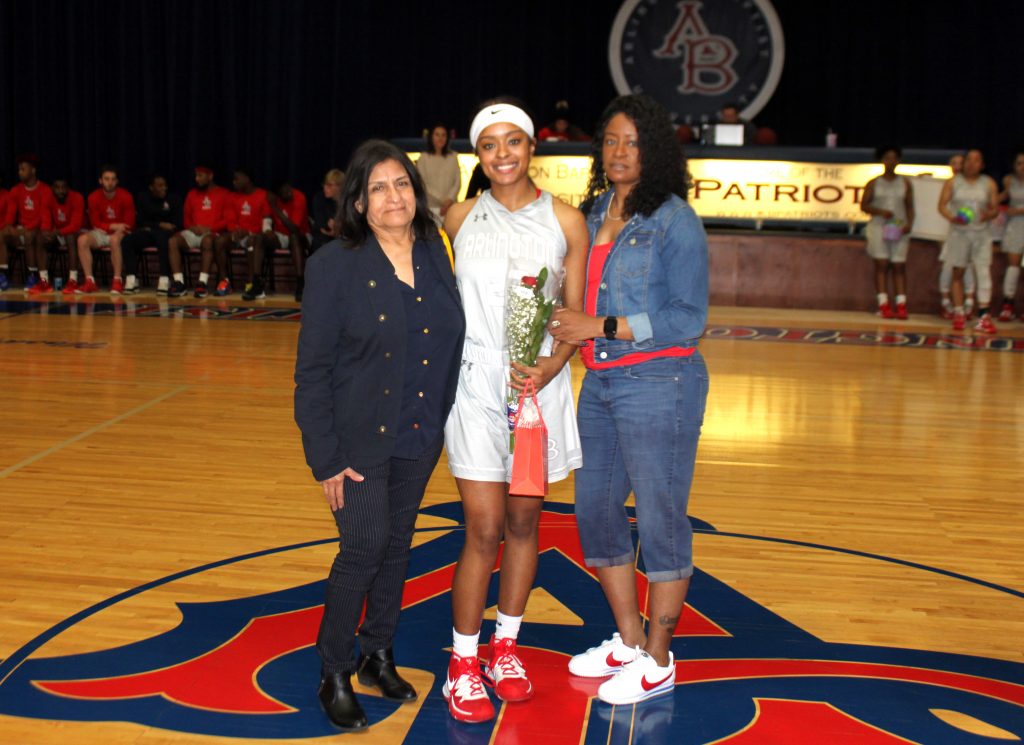 TiAna Davila #23
TiAna Davila is a Senior guard from Victoria, Texas. She will graduate in December with a Bachelor’s degree in Interdisciplinary Studies. She joined our Lady Patriot basketball program in 2018, coming from Lamar Community College. Over her 1 and ½ year career at Arlington Baptist, TiAna has played in 34 games, amassing 201 points, 107 rebounds, 29 steals, and 10 blocks. TiAna enjoyed her best game this season in a win over Ecclesia College where she scored 16 points, grabbed 7 rebounds, and dished out 6 assists. She has won an NCCAA National title and an ACCA National title in 2018 with the Lady Patriots. TiAna is a hard worker and brings great hustle to her team. She will be truly missed by our program. 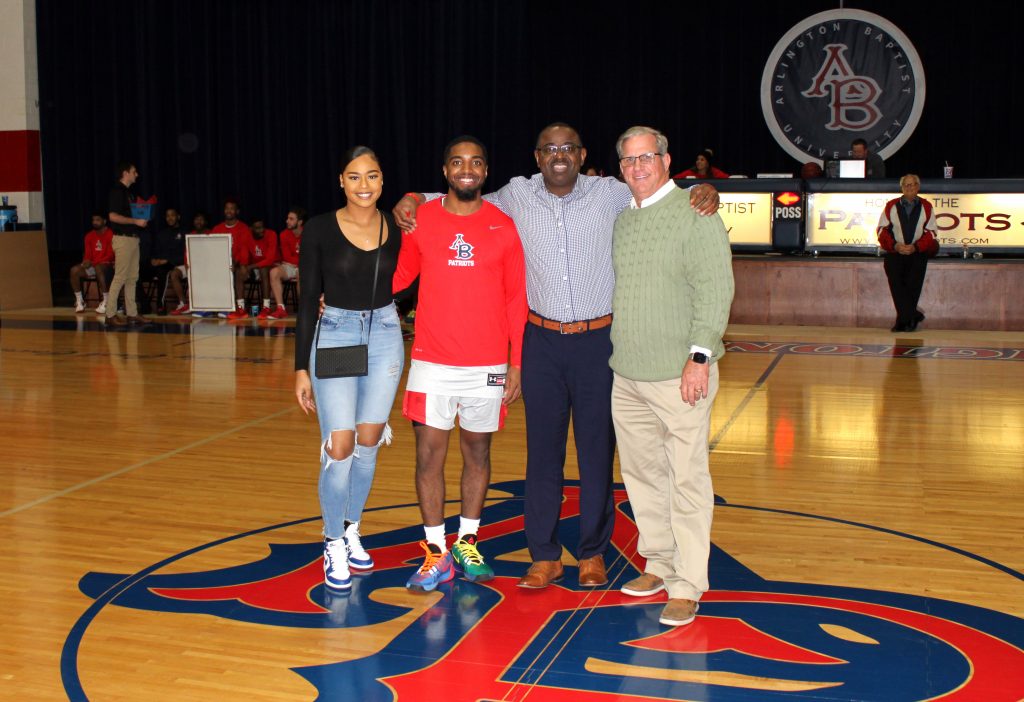 Jordan Williams #10
Jordan Williams is a Senior guard from Cibolo, Texas. He will graduate in May with a Bachelor’s degree in Business Studies, and currently holds a 3.83 GPA. Jordan joined our Patriot men’s basketball program in 2018. Over his two-year career here at Arlington Baptist, Jordan has played in 59 games, amassing 773 points, 135 made three-pointers, 201 rebounds, 67 steals, and 196 assists. Jordan enjoyed his best game last season against Barclay College, scoring 25, grabbing 6 rebounds, and leading his team to a 92-78 win. He has won an ACCA National Title last season with the Patriots. Jordan has been an excellent leader for his team since joining our program. His hard work and dedication will be greatly missed.

All three of these players have made great contributions to the Arlington Baptist University athletic program. Although they will be dearly missed by their teammates and coaches, we are excited to see how God will work in their lives in their future endeavors.