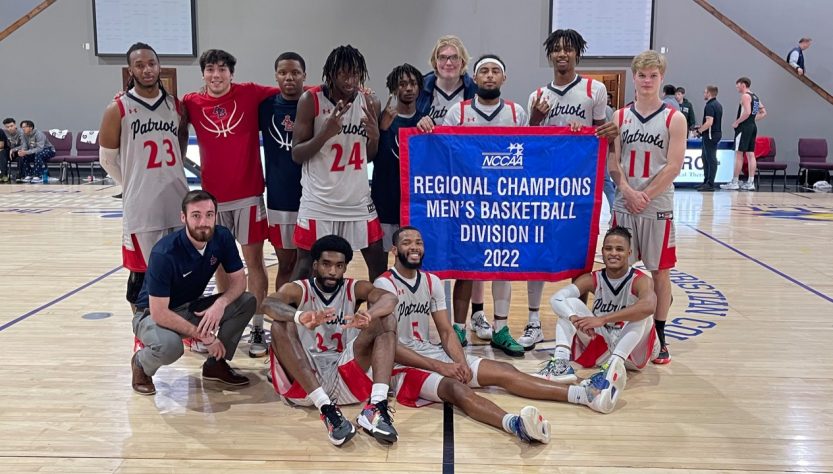 YOUR PATRIOTS ARE THE 2022 SOUTHWEST REGIONAL MEN’S BASKETBALL CHAMPIONS!!!

In the first round, the Patriots took on Barclay College out of Haviland, Kansas and maintained the lead throughout the entirety of the game. Trey Ballard and Mo Musa led the Patriots in scoring with 20 points each in the 101-73 win. Five total Patriots scored in double figures with Da’Vione Stafford adding 16 points, Darrell Green adding 14 points, and Chad Jackson adding 14 points as well.

The Patriots then took on a familiar foe in the second round, Southwestern Adventist University out of Keene, Texas. SWAU got the best of the Patriots in their last meeting, while ABU took the win over the Knights in their first meeting of the regular season. However, the Patriots maintained control of this game as well, leading the Knights for the whole 40 minutes of game time with a final score of 93-61. The Patriots were once again led by Trey Ballard and Mo Musa in scoring with the duo putting up 27 points and 20 points respectively. Ballard also led the Patriots in rebounds with 11, posting a double-double. Da’Vione Stafford and Darrell Green also scored in double figures, adding 12 points and 11 points respectively.

In the Southwest Regional Final, the Patriots would find themselves in a rematch of last year’s championship game by taking on the tournament host, Kansas Christian College. The Falcons defeated ABU in last year’s Regional Final, so the Patriots came in ready to avenge their loss on KCC’s home court. The Patriots ended the half up by 10 points, but the Falcons were able to storm back and take a one point lead early in the second half. The game would go back and forth from that point on with the lead changing multiple times. However, the Patriots stayed solid and were able to pull out the 79-75 win to bring home ABU’s first Southwest Regional Championship since 2014! Trey Ballard was a huge force for the Patriots, leading all scorers with 28 points. Mo Musa also had another big game, posting a double-double of 10 points and 10 assists. Da’Vione Stafford contributed 19 points shooting over 50% from the field. Darrell Green also scored in double figures adding 13 points, and led the Patriots in steals with 5.

The Patriots will compete in the ACCA National Tournament this week, also held in Joplin. Good luck, and GO PATRIOTS!!!