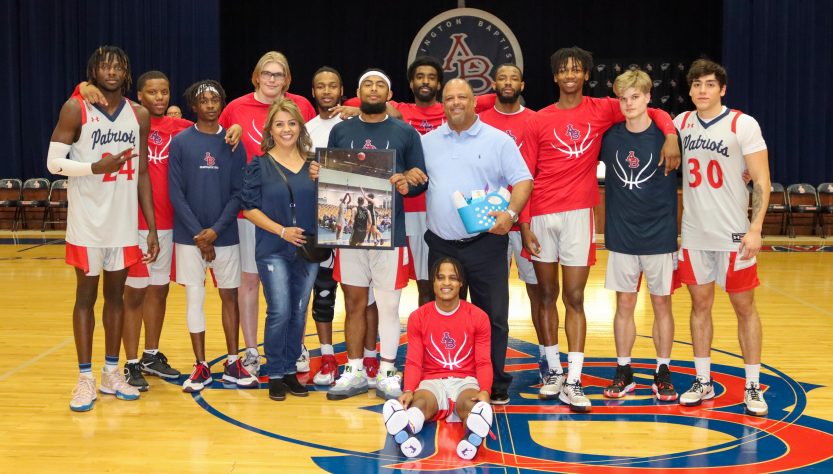 The Lady Patriots played a tight first half, going into halftime up by only 2 points. They then erupted for a commanding 3rd quarter, outscoring the Crusaders by a score of 27-8. The Lady Patriots maintained their ground in the 4th and took the win over DCC with a final score of 82-57. The Lady Patriots had five players score in double figures: Jakayla Bradford and Alex Cereceres each posted 16 points, LaQuesha Clark and Karina Rivera each added 11 points, and Da’Myia Derby contributed 13 points to the win. Derby and Bradford also had 7 rebounds a piece to lead the team.

The Lady Patriots are back in action tonight against Ecclesia College out of Springdale, Arkansas for their last home game of the season. They will then head to Arkansas at the end of this week to take on Arkansas Baptist on Thursday and Friday. They will then begin to prepare for the Southwest Regional Tournament next week.

Before the men’s basketball game, Sheldon Hodge was honored as the lone senior in ABU’s basketball program. To date, Sheldon has amassed 685 points and 487 rebounds in 85 games across his four years at ABU. He was a member of the ACCA National Championship team in 2019 and last year, was a part of the Patriot basketball team that finished as runner-up in the NCCAA DII National Championship. Sheldon was named an ACCA All-American in 2021 after nearly averaging a double-double. He enjoyed his best game this season against Spurgeon College, posting 20 points and 18 rebounds. Sheldon will graduate with a Bachelor of Science in Business in May of this year. His leadership and work ethic are unmatched and will be dearly missed. Thank you, Sheldon!

In their last home game of the season, the Patriot Men’s Basketball Team enjoyed an exciting game and also pulled out the win with a final score of 103-91. The Patriots had four players score in double figures: Trey Ballard led all scorers with 33 points, Mo Musa was second in scoring with 25 points, Darrell Green added 19 points, and Da’Vione Stafford posted 15 points in the win. Ballard had the hot hand all night, going 7-10 from behind the arc. Stafford also grabbed 10 rebounds to go with his 15 points for a double-double.

The Patriots will travel to Randall University this Friday to play their last game of the regular season before preparing for the Southwest Regional Tournament next week in Kansas.

IT’S ALWAYS A GREAT DAY TO BE A PATRIOT!