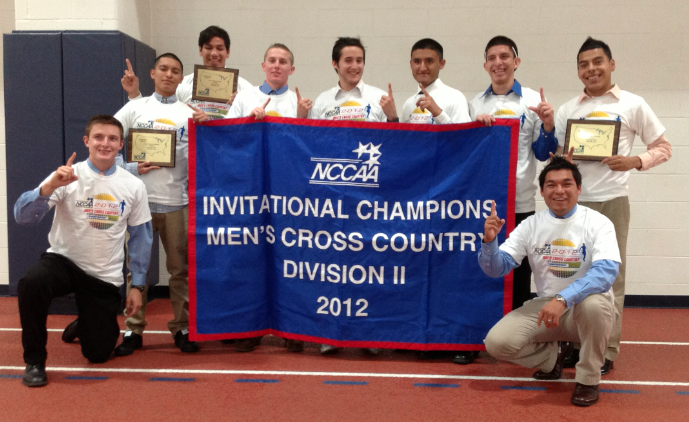 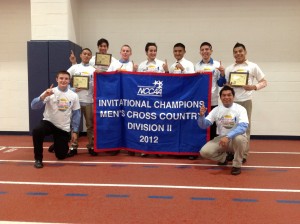 CEDARVILLE, Ohio- The Arlington Baptist College Patriot XC team in its program’s second year of existence claimed their first National Christian College Athletic Association DII Men’s Cross Country Championship on Saturday, Nov. 10th at the beautiful Elvin King Memorial Cross Country Course.
ABXC had three top 5  finishers, which included freshman Alex Maciel (Grand Prairie, TX/Grand Prairie HS) taking home the NCCAA DII Men’s Cross Country Invitational Championship Individual Title with the time of 26:47.
The Patriots Head Coach, Jason Covarrubias described the day as “Mere perfect, with temperatures in the 50’s and wind gust of 10-15 mph, you could not have asked for a better day!”  He went on to say that, “He was so proud of his guys!  They have worked so hard all season for this race and they seized the moment.  We are so honored to be in this position with it being our second season as a program.”  The Patriots finished with an astounding team score of 23 points with six individuals in the top 8 and all seven in the top 22.  Maranatha Baptist (Wis.) finished in second place 72  points behind Arlington Baptist College.
Individually, the men ran outstanding, with five setting new personal records (PR). Freshman German Lopez (Kaufman, TX/Kaufman HS) finished in 3rd place overall with a PR time of 27:17, sophomore Daniel Ortega (Angleton, TX/Angleton HS) placed 4th with the time of 27:59, and sophomore Daniel Arevalo (Joshua, TX/Joshua HS) mirrored his last year’s 7th place with the time of 29:10.  Sophomore runner and Arlington Baptist College’s starting center fielder Zachary Thompson improved his 2011 NCCAA National Invitational Championship place by 7 spots finishing in 8th overall with a PR of 29:13.57 rounding off the Patriots’ top 5.  Freshman Robert Cruz (Tidehaven, TX/Tidehaven HS) finished the tough course in 8th place with a PR of 29:13.59 and freshman Elijah Vargas (Mansfield, TX/Mansfield HS) set a PR by 40 seconds with the time of 30:40 which was good enough for 22nd place.
ABXC’s theme, goal, and hope all season long was to Give God The Glory! They give all the glory to God for what Zachary Thompson calls it, “Our Dream Season!”
For complete meet results click here