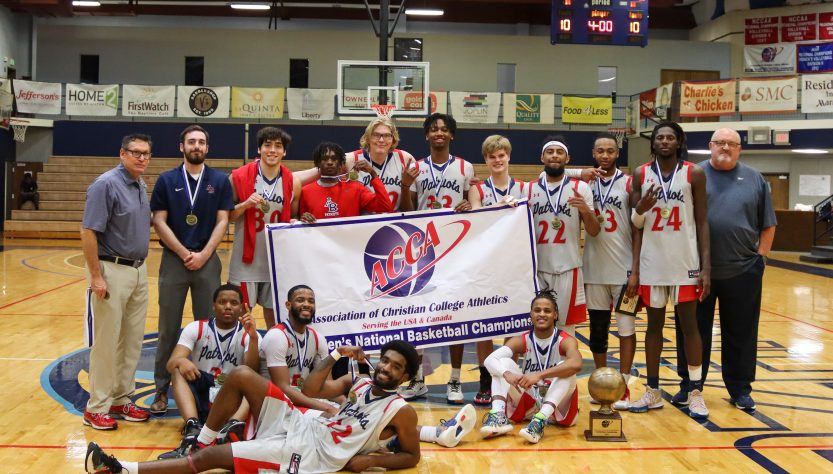 The Patriot Men’s Basketball Team’s season came to an end last week in Joplin, MO after falling in the NCCAA DII National Tournament. However, they will still end the season as ACCA National Champions!

The Patriots competed in the ACCA National Men’s Basketball Tournament in Joplin, MO March 2nd through 4th. They took on the host school, Ozark Christian College, in the first round and defeated them in a close game by a score of 81-78. Four Patriots scored in double figures, led by Trey Ballard with 19 points. Sheldon Hodge grabbed a game-high 16 rebounds while also adding 9 points.

ABU would then take on Trinity Bible College, cruising to a 20-point second round win. Trey Ballard led all scorers with 33 points, while Da’vione Stafford also put up significant numbers with 24 points and 9 rebounds. Sheldon Hodge again had a game-high 15 rebounds and added 15 points for a double-double.

In the ACCA National Championship Game, the Patriots would face University of Los Angeles College of Divinity out of California. ULA fought back from a 14 point deficit at the half to make it a close game, but the Patriots were able to maintain their lead to take the title. Da’Vione Stafford led his team in scoring with 21 points. Darrell Green and Mo Musa also had double-figure performances, each scoring 11 points. Trey Ballard contributed 18 points and was named Tournament MVP for his efforts throughout the tournament.

This is Arlington Baptist’s 5th ACCA National Championship Title, and the first under head coach, Bubba Jennings. Congratulations to the Patriots on a great season! We look forward to big things to come for this program!