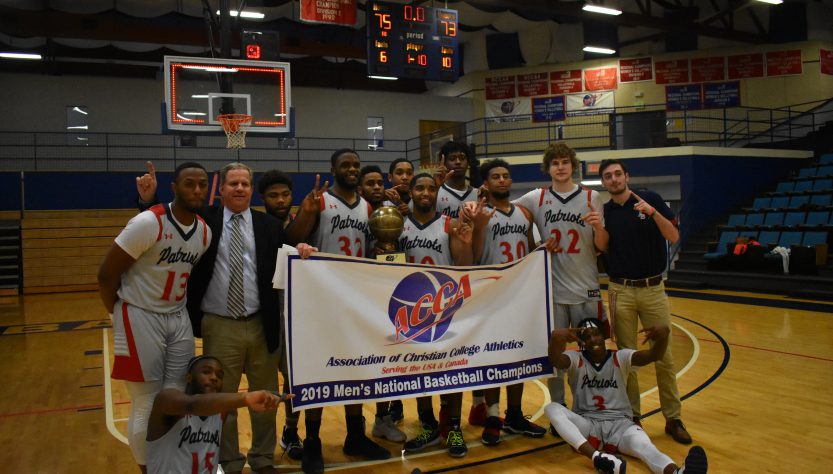 Joplin, MO- Arlington Baptist University defended their 2018 title as the #5 seed. They faced the host school and #4 seed, Ozark Christian College during the first round. They were then up against the #1 seed The University of Los Angeles College of Divinity. The championship game was a match up between the #5 an #6 seed, but the game did not disappoint.

Against OCC, every Patriot that scored did so in double digit fashion. Senior big man, Kennedy Jones finished with 26 points and 10 rebounds. Tournament MVP, Jashun Petite, also recorded a double-double with 11 points and 10 assists. The Patriots shot 100% from the charity stripe. They were down at half, but finished with an 84-76 win.

ABU went into the second night with a daunting task against the team from the west coast, ULACD. Despite the bench being outscored by ULACD’s bench, 40-0, they still came out victoriously 85-77.  Freshman, Tra Mallard, shot 4-6 from deep to finish with 23 points. The three ball helped carry the Patriots as they shot 42% from beyond the arc.

The final game of the tournament was against NCCAA Southwest Region opponent, Champion Christian College out of Hot Springs, Arkansas. Throughout the entire game it went back and forth. The largest lead of the game for either team was seven points by ABU.  Jashun Petite had 20 points and five rebounds. Daegan Gentry was huge off the bench gathering 11 rebounds. The difference in the game was the Patriots shot 44% from the floor compared to 40%. Throughout the end, the Patriots were calm and collected to win 75-78.