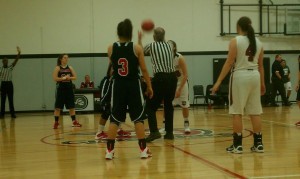 The Arlington Baptist Lady Patriots faced off against the Dallas Christian Lady Crusaders to finish their last game before the NCCAA Regional Tournament begins on Friday February 28th.

Jade Johnson, a Sophomore transfer from the University of Texas at Arlington, continued to lead the Lady Patriots on both sides of the court. Defensively, Johnson grabbed 9 boards with 4 from the offensive end while aggressively getting to the basket to drop in 7 out of 16 attempts and going a perfect 11-11 from the foul line, ending the night with yet another double-double this year – 25 total points and 13 rebounds.

Freshmen Shooter Tori Wise led the the bench for the Lady Patriots, knocking down 50% of her shots both inside and out, going 4-8 from down town to prevent the Lady Crusaders from ever making it a game. Total, the bench put up 41 points –  over 40% of the Lady’s total offense on the night.

The Lady Patriots move into the Regional Tournament 18-6 overall and 7-1 in Regional play where they have scored on average 94 points a game and have limited their Region opponents to an average of 65 points per game.

The Lady Patriots are still awaiting a coach’s vote in order to be given seeding for this weekend. Whether the 1 seed or the 2, the Lady Patriots look forward to an exciting and historic postseason.