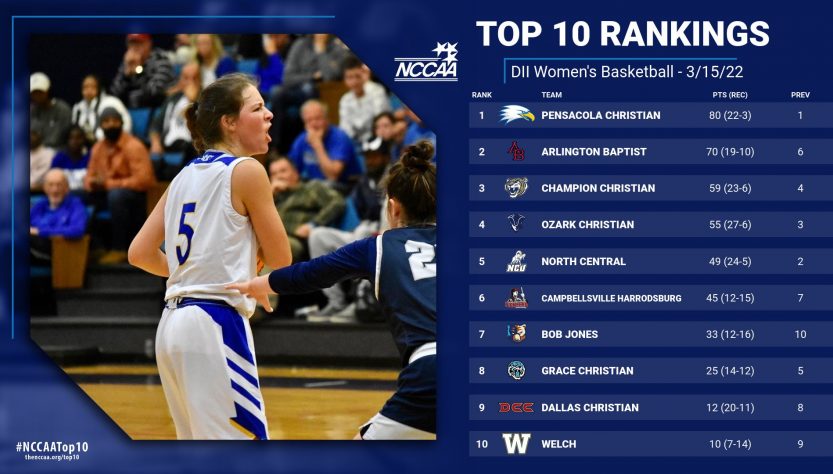 For the second consecutive season, the Lady Patriot Basketball team finished 2nd in the NCCAA DII National Women’s Basketball Tournament. We are immensely proud of this young team and we are looking forward to next season already!

After heartbreaking losses in both the Regional and ACCA Tournaments, the Lady Patriots were determined to make a statement in their final tournament of the season.

They first took on 5th-seeded Grace Christian University out of Michigan. GCU came out strong making an early run on the Lady Patriots in the first quarter, leading to a 9-point lead after the first 10 minutes of play. The Lady Patriots then shook off their nerves, and won the next three quarters to pull out the 86-75 first round win. Haley Herrin led all scorers with 21 points, going 7-16 from the field and 6-14 from behind the arc. Da’Myia Derby was the second leading scorer of the game with 20 points, while Jakayla Bradford posted a double-double of 18 points and 11 rebounds.

After a close first quarter where the Lady Patriots found themselves down by 2, they came out of the gate swinging by starting the 2nd quarter with a 16-0 run led by Haley Herrin and Heaven Scott. The two combined for all 16 points in that run to open the second quarter and start the double-digit lead. The Lady Patriots would outscore the Tigers 34-13 in the second quarter alone to go into halftime with a 17-point lead. The Tigers fought back coming out of halftime, outscoring the Lady Patriots in the 3rd quarter. However, ABU’s confidence never waivered and they were able to maintain a double digit lead for the rest of the game. The Lady Patriots would go on to win by a final score of 90-70, led by Haley Herrin’s game-high 30 points. Herrin shot over 50% from the three-point line, netting eight three-pointers in the game and grabbing 10 boards for a double-double. Heaven Scott also provided a huge spark for the Lady Patriots putting up 20 points and grabbing 9 rebounds. Jakayla Bradford posted another double-double with 17 points and 13 rebounds.

The stage was set for the Lady Patriots to play in their 10th consecutive NCCAA DII National Championship. They would take on #2 seed, Pensacola Christian College, out of Florida. The last time that these teams had matched up was the 2019 NCCAA National Championship game, where ABU was able to capture its 5th National Women’s Basketball Title in a row. This was also the last time Arlington Baptist brought home that National Title after the 2020 National Tournament was canceled due to COVID and then falling in last year’s Championship.

The Eagles of PCC came out showing extreme confidence, while this Lady Patriot team consisting of only freshmen and sophomores showed some jitters in the first half. The Lady Patriots found themselves in a difficult hole to dig out of, going into halftime down by 31 points. However, they showed some resilience in the second half outscoring PCC in both of the final two quarters and cutting the deficit down to as low as 7 points. Unfortunately, the Eagles’ commanding offense in the first half would prove to be too much for the Lady Patriots to recover from. Arlington Baptist fell to Pensacola by a final score of 74-85 to finish as National Runner-Up for the second year in a row. Freshman, Da’Myia Derby led all scorers with 23 points. Derby also grabbed 11 boards for a double-double and dished out 6 assists. Haley Herrin was named to the All-Tournament Team after averaging 19 points per game across the three games.

The Lady Patriots have much time to grow as this year’s team was made up of 4 sophomores and 8 freshmen. We are excited for the bright future of this young team and we look forward to cheering them on next season. It is always a great day to be a PATRIOT!