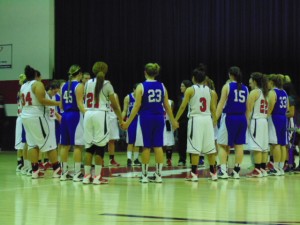 At the top of the Nation (NCCAA II) in scoring, Jade Johnson (ranked #2) and Morgan Hale (ranked #5) went to work yet again Monday night.

Taking on Conference opponent Ozark Christian College (6-19), the Lady Patriots (now 16-6) had over half the team reach double figures as they cruised to a 99-70 win.

The Lady Patriots outscored the Lady Crusaders by fifteen in the first half thanks to Sophomore Post Morgan Hale who had 18 of her total 24 on the night in just the first twenty minutes of play. Defensively, however the Lady Crusaders made a conscious decision that Hale would not beat them for a full 20 minutes, allowing her only points in the second half to come from the free-throw line.

Stepping up tremendously, Jade Johnson answered Ozark’s defensive pressure on Hale by getting to the free-throw line herself and scoring transition buckets down low, as she finished the night with 24 points – all but four coming in the last 20 minutes of the game.

Becca Bowlard and McKenna Thomspon each tallied 16 points for the Lady Crusaders, with Chelsea Matlack putting up 14 herself.

Leading in assists and steals for another night was Point Guard Shanice Hill who had 10 points, 4 boards, 9 assists, 5 steals and only 1 turnover.

The Lady Patriots continue play tonight in an exhibition game against Abilene Christian University at 5:30 pm in Abilene, Texas.