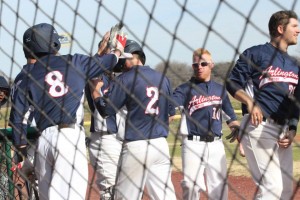 Patriots jumped out to an early lead on Texas Wesleyan University and captured an 11-3 victory on Tuesday at LaGrave Field in Fort Worth.

Five runs in the first three innings allowed Patriots to put the game away early.

An RBI single by Josh Eatherly, a two-run single by Clint Hall, and a bases loaded walk during the first inning and an RBI single by Justin Watson in the second inning supplied the early offense for Patriots.

Justin Watson led the Patriots’ offensive threat, as he got on base four times in the game. He scored three runs, had a double, and had one RBI.

Zachary Thompson recorded the win for Patriots. He allowed one run over 5 2/3 innings. He struck out two, walked one and surrendered six hits.

Mitch McLeod couldn’t get it done on the hill for Texas Wesleyan University, taking a loss. He lasted just two-thirds of an inning, walked one, struck out two, and allowed four runs.

Patriots increased its lead with two runs in the seventh and added four more runs in the top of the ninth. The 9th inning got off to a hot start when Hestand Foster singled, bringing home Watson once again.

The Patriots will resume play this weekend as they travel to Dallas Christian College for a three game regional series. The Arlington Baptist Patriots are currently 6-1 in Regional competition and are 11-12 overall.