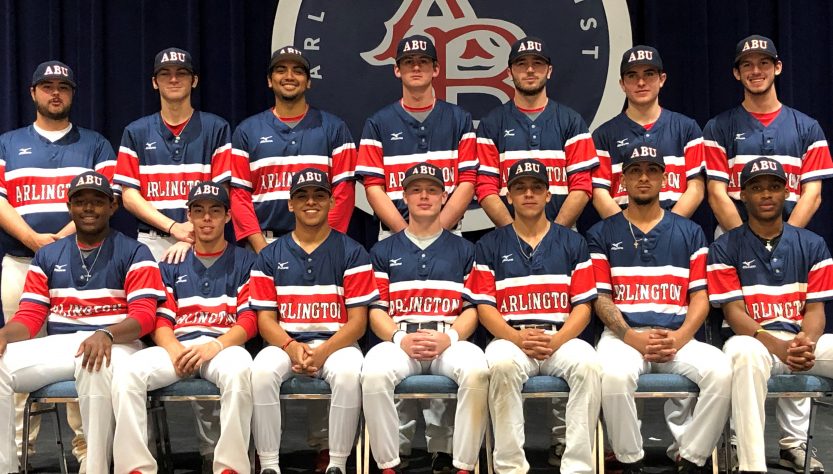 Arlington, Texas- After missing out on the NCCAA Southwest Regional Tournament last year, Coach Ritchey’s first season did not disappoint. He led his 14 man roster to the #4 seed at this year’s Regional Tournament held in Oklahoma City, Oklahoma. Many players were given multiple roles and new positions, but they bought into Coach Ritchey’s program. Two individuals also earned some hardware. Kaine Yeakle was honored as the NCCAA First Team All-Region as a utility player. Stephen Webb was an NCCAA Scholar Athlete for his academic achievements.

They began the tournament with a 7-6 victory over #5 Randall University. Starting pitcher, Kacey Waxler, completed the seven innings and earned the victory. Frank Jackson was 2-4 with three RBIs. It was a team win with contributions from all.

Their next game following the victory they lost to the host school and eventual Region champion, Southwestern Christian University 20-0. The Patriots were no match for the Eagles. Errors impaled ABU which resulted in a large deficit.

They finished their season with an 8-3 loss to #3 seed Ecclesia College out of Springdale, Arkansas. During the regular season Arlington split with Ecclesia. Senior Ryan Rivera pitched his final game of his career, but the Patriots came up short. Right fielder, Frank Jackson, and short stop, Ricky Boren, drove in the three runs with two and one RBIs respectively.

Arlington Baptist University’s baseball team finished the season with a 21-24 record. They had winning records on the road at 9-8 and against NCCAA opponents at 13-8. Coach Ritchey is losing some key players, leaders, and individuals, but he is excited about this year’s recruiting class. He will have the opportunity to recruit a full class and so far he has signed 15 players. Coach Ritchey says, “I’m excited about the guys coming back and then the new ones coming in. I believe we’re going to be in a better position to compete next year because of depth.” He states, “Our pitching staff will be key for next season. I’m eager to have people playing their own position and not a jack of all trades. I expect there will be a lot of competition at each spot.”