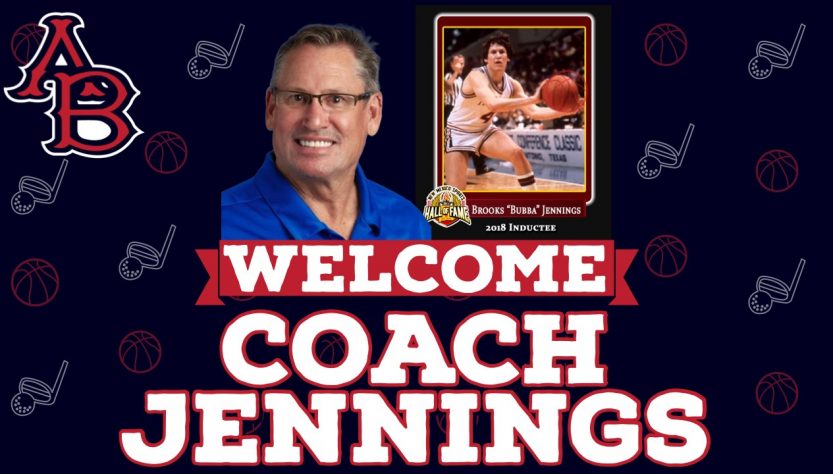 Bubba Jennings has accepted the position of Head Men’s Basketball Coach and Head Golf Coach at Arlington Baptist University. Please help us in welcoming Coach Jennings to the Patriot Family!

Brooks “Bubba” Jennings is widely known for his stellar playing career at Texas Tech University between 1980 and 1985. As a Red Raider, Jennings recorded 1,727 points, 378 assists, 149 steals, started all 117 games he played in, and was a four-time All-Southwest Conference selection. He played a huge role in a historic season during his senior year at Tech, leading the Red Raiders to a 23-8 overall record while averaging 19.5 points per game. That season, Texas Tech secured the SWC Conference Championship as well as a berth in the NCCA Tournament. Jennings was named the SWC Player of the Year, the SWC Defensive Player of the Year, honored with the Frances Pomeroy Naismith Award, and was an All-American Honorable Mention selection.

Following his successful playing career, Jennings was selected by the Dallas Mavericks in the fourth round of the 1985 NBA Draft. However, he instead went to Europe for a brief time to play for the London Docklands Crystal Palace. He then began his coaching career as a graduate assistant at his alma mater, Texas Tech. He was named the head coach at Artesia High School (Artesia, NM) in 1986, where he led his team to two state titles in nine seasons. He also served as the golf coach and led them to a state title as well. Jennings then moved on to coach at Coronado High School in Lubbock, and was named the District 3-5A City Coach of the Year during his time there. He eventually returned to Texas Tech and served as the team’s video operations manager before being named a full-time assistant coach in 2008. Most recently, Jennings served as the head boys basketball coach at Peaster High School.

We are very excited to have Coach Jennings at Arlington Baptist University and we look forward to the future of our Patriot Men’s Basketball program and the startup of the Patriot Golf program under his leadership!