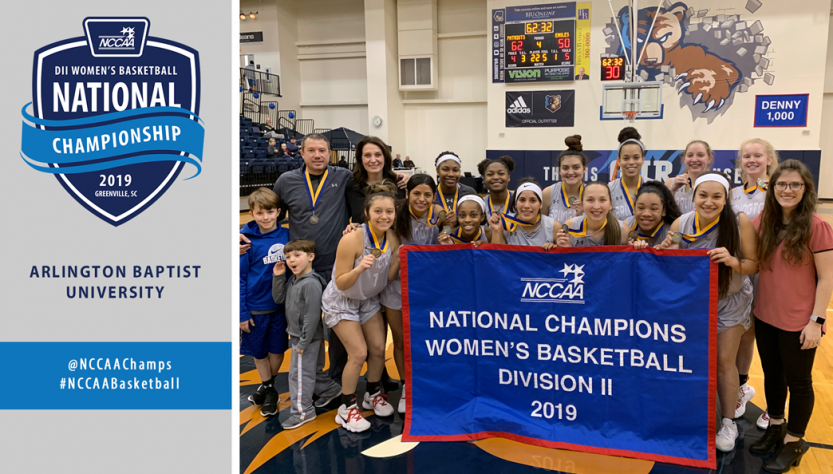 Greenville, SC:  Arlington Baptist University (ABU) defeated No. 2 seeded Pensacola Christian College by the score of 62-50 to claim its fifth straight NCCAA DII Women’s Basketball National Championship. Zayda Gonzales took over the game in the second half to help seal the victory, and she led all scorers with 25 points and added 7 rebounds. Aaliyiah Clark contributed 13 points, 4 rebounds, and 3 assists in the game.

As the No. 1 seed, the Patriots earned a first round bye and faced No. 4 Maranatha Baptist University in the semifinals. ABU’s Zayda Gonzales led the way with 18 points and 6 rebounds as the Patriots took down the Sabercats 62-50. Jaila Cook added 14 points and 7 rebounds, while Aaliyiah Clark tallied 10 points and 3 rebounds. The Patriots had 12 steals and caused 23 turnovers in the win.

ABU’s Zayda Gonzales was named Tournament Most Outstanding Player as she averaged 21.5 points and 6.5 rebounds. See a complete list of awards, including All-Tournament Team, All-Americans, Scholar-Athletes, and more here.

Full results and box scores from each game are posted here.